Neurofilaments are the main cytoskeletal structure proteins in neurons. They are about 10 nm in diameter, thicker than actin and thinner than myosin, and are thus classed as intermediate filaments (IFs). Neurofilaments comprise four different subunits, the stoichiometry of which varies depending on the maturity of the neuron. Three of these subunits, NfL (light), NfM (middle) and NfH (heavy), are type IV IF proteins and are present always, and the fourth is either α-internexin (also type IV) or peripherin (type III), for the central and peripheral nervous systems, respectively (see Figure 1).

Axonal injury and neurodegeneration lead to the appearance of neuronal proteins in the cerebrospinal fluid (CSF). NFs, being abundant proteins exclusively expressed in neurons, may serve as a marker of neuronal degradation. Numerous studies indicate that NFs can be markers of acute conditions (stroke or trauma), as well as a variety of neurological diseases. Monitoring NfL levels in CSF or blood is useful in clinical diagnostic evaluation for predicting the progression of various acute and chronic neurological diseases as well as for assessing treatment efficacy.

HyTest offers several monoclonal antibodies (MAbs) for the development of a sensitive and specific NfL immunoassay. MAbs recognize NfL in CSF with high specificity and sensitivity. Pairs of MAbs (Table 1) effectively recognize both recombinant and endogenous NfL and may be used for a variety of immunoassays such as direct EIA, indirect EIA, and sandwich-type immunoassays with level of detection 10 pg/ml (Figure 2) and with good correlation to a commercially available reference assay. HyTest anti-NfL antibodies are a good choice for the development of highly sensitive immunoassays. 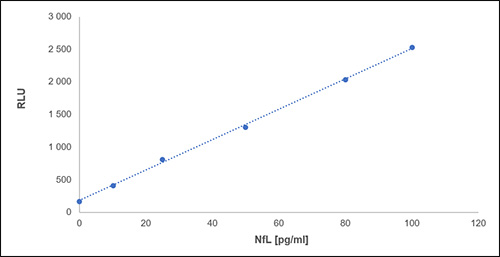