HF is a severe clinical and public health problem that is characterized by an increasing prevalence and economic cost. NT-proBNP, a derivative of pro-B-type natriuretic peptide (proBNP), is an established biomarker for heart failure (HF) diagnostics. The concentration of NT-proBNP in blood increase rapidly as a consequence of cardiac wall stretch and correlate with the severity of the disease. Analysis of NT-proBNP levels are used e.g., for exclusion of HF, risk stratification, and as a prognostic marker of HF.

HyTest offer 3 new clones for NT-proBNP epitopes 27-31 (MAb NT13) and 43-46 (MAbs NT45 and NT46). These new clones are working with a variety of our existing NT-proBNP antibodies in fluorescense, chemiluminescence, and lateral flow platforms. In addition they have very good correlation with existing commercially available proBNP assay (Figure 1). 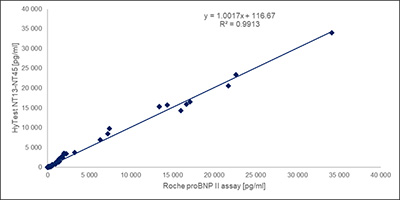